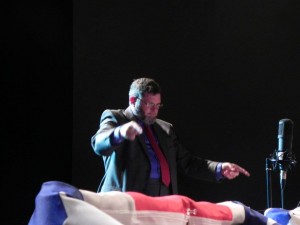 Rob’s first private music instruction was through his father, Clarence Nordan, Jr., who currently plays in the CCO.  His other private instructors have included: long-time Navy Band soloist Homer Phillips, retired Professor of Music Emerson Head, and former Principal trumpet of the National Symphony Orchestra in Washington, D.C., Chuck Gallagher.  Rob has been active professionally in church music, conducting, and music teaching since 1974.  He has also studied conducting with the late Robert Burton, and Maestros Donald Portnoy and Florin Totan.

Maestro Nordan is committed to conducting orchestral music and remaining active in the lives of musicians for many years.  He has a tremendous vision to make the live performance of music a vital element for the entire community.  His drive, zeal, and vision encapsulate what he believes music is all about.  Johann Sebastian Bach penned the letters “SDG” on many of his compositions.  These letters stand for “Soli Deo Gloria”, which means “to God alone be the glory”.  This philosophy is Maestro Nordan’s personal motto, and consequently that of the CCO.  You will find “SDG” on many of the CCO printed programs.

When not conducting, Rob enjoys the company of his wife, Elizabeth, and spending time with their extended family.